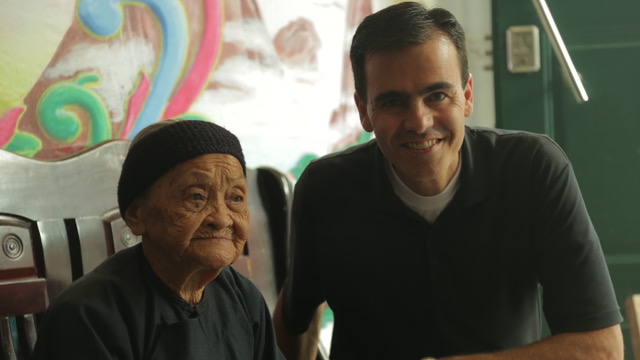 Do you want to know the secret of a long and happy life?  Ask someone who has lived the longest.  Indeed, centenarians can teach us the five simple life secrets.

No one in my family has ever made it to 100.  I suspect this is because of the genes that run in our family.  Despite not winning the genetic lottery in life, I am determined to ski on my 100th birthday.

Even though I don’t have the longevity genes, I know that I can reprogram the genes that I do have to optimize my health in a way to still ski the moguls at age 100.  Indeed, studies show that fully 75% of our health and longevity comes from our daily health choices, not our genes!

Since graduating from Johns Hopkins Medical School in 1995, I have kept close records of the centenarians in my cardiology practice.  Interestingly, all seven of these centenarians required a pacemaker.

Even at 100 plus, each of these patients effortlessly breezed through their pacemaker surgeries.  Indeed, none of them required any narcotics for pain relief.  Each was stoic, and each went home from the hospital in under 24 hours.  When compared to pacemaker patients half their age, these centenarians put them to shame.

One of these centenarians, Mike age 102, was very frustrated with me when I told him that he couldn’t ride his bicycle for three weeks after his pacemaker surgery.  It wasn’t that I was trying to be mean I just didn’t want him to fall and potentially pull a pacemaker wire out of his heart.

In the end, Mike could only go ten days without riding his bike before he was back at it.  Fortunately, he didn’t crash, and his pacemaker wires stayed in place.

The Annual US Centenarian Study

Each year United Healthcare randomly surveys 100 US centenarians and asks them a series of questions to better understand the secret of life.  As one who wants to learn from those who have lived the longest, I have studied each of these surveys for the last ten years.  Below are the top five themes that came up every year from these centenarians.

A Yale University study showed that those who were the most positive about their lives and the aging process lived 7.5 years longer.  Indeed, when it comes to staying positive, most centenarians reported that laughing and having a sense of humor was critical.

These centenarians were ahead of their time.  Even before apps like Head Space took over, these centenarians had already learned to meditate.  Now we know, based on the work of Nobel Prize-winning Dr. Elizabeth Blackburn, that meditation may slow cellular aging by 30%!

Contrary to popular belief, most people get happier as they get older.  Indeed, a study of 340,847 Americans confirmed that the older you get, the happier you are.

Interestingly, the age at which people start getting happier seems to be about age 50. Perhaps the reason why age increases happiness is that we stop worrying about what might happen and start living.

2. Keep Close to Family and Friends

Thus, it should come as no surprise that centenarians reported that their best memories came from the time they spent with friends and family, especially family vacations.  All centenarians intuitively know that you need social support to thrive.

Recently, while seeing a patient who was suffering from a heart arrhythmia, I inquired about who she considered being her social support.

“Oh, Rosemary,” she said with a sly smile.

“Is that your daughter?” I asked.

“No, my cat,” she laughed. “The best friend a woman could have!”

We both got a good chuckle out of this, but I did want to know that she also had some human support. Did she have regular visitors? Did she ever feel lonely?

“How could I feel lonely?” she asked. “I have three wonderful kids and seven beautiful grandchildren. Someone is over at my place almost every weekend.”

“Oh, well,” she said. “Those days can get pretty lonely. But I wouldn’t want to complain.”

As it turns out, a lot of people think that there’s a difference between being lonely and being isolated. But at least regarding health impacts, that’s not the case. That was a key finding of a 2010 study of social relationships and mortality by Brigham Young University’s Julianne Holt-Lunstad.  What Holt-Lunstad has found is that when it comes to your risk of premature death, loneliness is far more critical than your smoking status, what you eat, or if you are even overweight.

I’ve definitely noticed in my patients a tendency to downplay or deny feelings of loneliness. And that’s increasingly problematic in a world in which isolation is increasingly the status quo.

The centenarians in China’s Longevity Village, my cardiology practice, and in this United Healthcare Study have all learned how to keep daily intimate contact with family and friends.  How do we do that? I often tell my patients that the best way is to cure their loneliness is to heal someone else’s. After all, when two isolated people are together, they’re no longer isolated.

If you study the diets of centenarians around the world, you will find that it is very consistent.  They aren’t following the latest fad diets on the Internet or in “health books.”

As described in The Blue Zones and The Longevity Plan, and backed by many scientific studies, centenarians tend to eat primarily a plant-based diet.  They load up on the vegetables, legumes, and fruit with every meal.

Sugar and processed foods are mostly absent from centenarian diets.  The grains they do eat are primarily intact grains rather than the processed and refined flour-based grains we eat in the U.S.

Meat, except for fish, is eaten sparingly.  Centenarians also tend to eat lighter meals and stay away from fried and oil-heavy foods.

These centenarians in this United Healthcare Centenarian Study were no slouches.  And they certainly weren’t sitting around in a wheelchair waiting to die.

Instead, the centenarians in this study loved to hike, lift weights, or do cardio exercises outside.  They defied the stereotype that most people have about centenarians.

Those who couldn’t do these activities walked regularly.  The centenarians in this study have learned by experience that the adage, “use it or lose it” is entirely correct.

Centenarians almost intuitively knew that sitting was the new smoking.  Their bodies were always moving.

There is a lot of truth to thinking yourself young.  In the book, Counterclockwise by Harvard psychologist Ellen J. Langer, she recounts a scientific study she did in the 1980s.

On the day of this study in 1981, eight arthritic and debilitated men in their 70s entered into the time warp study that Dr. Langer had created.  Everything in this converted monastery was 1959.  From the books to the radio, and even to the TV, everything was 1959 rather than the 1981 world in which they were living.

For the five days of this experiment, these eight old men lived as if they were 22 years younger.  They did the activities that younger people did.  Everything they discussed had to be from the 1950s.  No mirrors, modern-day clothing, or any technologies created after 1959 were allowed into the monastery.

At the end of their five-day stay, the previously old and frail men were tested again.  Interestingly, after pretending to be 22 years younger, all study participants started becoming 22 years younger.  When tested they showed better physical strength, dexterity, posture, memory, cognition, hearing, and vision.

Even the way they walked changed.  No longer were they hunched over and shuffling.  They walked as younger people walked.  Almost unbelievably, on the last day of the study, these previously old and frail men had even spontaneously organized a game of touch football on the lawn.

Could Aging Be a Nocebo Effect?

In fact, I’m convinced that at least in the US, most people’s view of aging is a nocebo effect.  We think we will lose our health as we age and it then becomes a self-fulfilling prophecy.  Dr. Langer’s work confirms that much of aging is really just a mindset.

At least 99% of my patients never want to live to 100.  They are sure that one hundred-year-olds must be miserable.

Based on my studies and interactions with centenarians, this is anything but true.  Almost without exception, centenarians are some of the happiest people you will ever meet.  Also, many centenarians are physically much more active than people half their age.

Every year you will add one more year to your age.  You can either choose to act, feel, and be one year older or one year younger.  The choice is up to you.

Famous author Jim Rohn used to say, “You are the average of the five people you spend the most time with.”  If you hang around people who complain about getting old and health problems, then this is what you will become.

In contrast, if you surround yourself with people who think, feel, and act young then this will naturally rub off on you.  Aging is mostly a mindset.  To live to 100 is a beautiful thing as studies show that to make it to 100 you had to have had fantastic health in your 90s.

The five secrets that the 100 centenarians in the United Healthcare Annual Centenarian Study have taught us are simple things that everyone can do.  Studies show that our bodies are genetically hard-wired to help us live to age 90 in good health.

To unlock the 90 good years of health we are genetically programmed to get, you need to make the right daily health decisions now and embrace a youthful mindset.  To get the last ten years and make it to 100 will require a meticulous following of the five life secrets that centenarians know.

What are you going to do on your 100th birthday?  Please leave your thoughts and questions below.  The comment period will be open for 30 days.  I promise to answer every question posted.

If you liked this article, please be sure to sign up for our free weekly newsletter, podcast, or pick up a copy of our new book, The Longevity Plan.