7 Ways to Extend Life and Prevent Cancer with IGF-1

On January 26, 1986 all of America was glued to the TV screen as they watched the Super Bowl XX match up between the Chicago Bears and the New England Patriots.  Favorite among Americans was the massive rookie defensive tackle of the Chicago Bears, William “The Refrigerator” Perry.

Perry seemed to have it all.  He was one of the biggest and fastest players to ever play the game.  He started the season at 380 pounds.  Not only was he formidable on defense but he was also a powerful secret weapon on offense as well in the role of a running back.  Perry represented the modern NFL player built much bigger and stronger than previous generations of NFL players.

Insulin-like growth factor 1 (IGF-1) is a hormone similar in structure to insulin.  IGF-1 is one of the most potent hormones stimulating growth.  IGF-1 levels are highest during the childhood growth periods and continue to play a role in growth and muscle development even in adults.

NFL football players and body builders likely have the highest circulating levels of natural IGF-1 due to their lifestyles.  For some NFL players they still wanted even higher levels of IGF-1 through performance enhancing drugs.  For example, IGF-1 was suddenly thrust into the spotlight during the 2013 Superbowl game when it was revealed that Baltimore Ravens star Ray Lewis was doping with IGF-1 from deer-antler pills.  Deer-antlers contain high levels of IGF-1 as IGF-1 is what causes the antlers to grow so fast each year in the life of a deer.

On first blush it seems like IGF-1 is something all of us want.  Who wouldn’t want to possess super human size and strength?  Is it any wonder New York Yankees baseball legend, A-Rod or Alex Rodriguez lied under oath that he did not use performance enhancing IGF-1 despite evidence to the contrary?

The Laron Dwarfs: People with Genetically Low Levels of IGF-1

At the same time “The Refrigerator” Perry was dominating the NFL, far away to the South, Dr. Guevara-Aguirre discovered the Laron Dwarfs in Ecuador in 1987.   Dr. Guevara-Aguirre was interested in these three to four foot dwarfs as legend had it that they lived very long lives free from cancer or diabetes.

At the time no one believed Dr. Dr. Guevara-Aguirre’s findings.  It was impossible that there were no reported cases of cancer or diabetes in any group of people.

Currently, there are about 300 known people in the world with the Laron-type Dwarfism.  Of these 300 people, most reside in Ecuador.  Researchers have reported that most of these dwarfs could probably live much longer if it were not for their high rates of alcoholism and accidents likely from their short stature.

The reason why Laron Dwarfs don’t develop cancer is really quite simple.  IGF-1 stimulates growth.  If growth is not stimulated then cancerous cells do not grow and multiply.  Likewise, with low levels of IGF-1 their blood glucose levels remain low even if they become obese.

Aside from their short stature, the other challenge Laron Dwarfs face is that of a decreased intelligence.  In addition to growth and muscles, IGF-1 also enhances cognitive performance.

Interestingly, if you inject IGF-1 into these Laron Dwarfs, like A-Rod, during their adolescent growth periods they will grow to a normal size.  However, if IGF-1 is given after puberty then they will remain as dwarfs.  Clearly, IGF-1 administration has to be critically timed to reverse their dwarfism.

On the other end of the spectrum from the Laron Dwarfs is acromegaly.  Acromegaly is a condition where people continue to grow due to a pituitary gland abnormality.  As opposed to the Laron Dwarfs, these people are giants and have very high levels of IGF-1.  Unfortunately, these giants tend to die very young.

One of my favorite Hollywood movie stars growing up was André the Giant who reportedly stood at 7 feet 4 inches (224 cm) and starred in the classic movie The Princess Bride (affiliate link).  Unfortunately, André the Giant suffered from acromegaly and died at the young age of 46 due to complications from this condition. 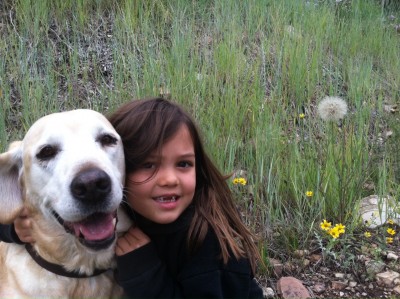 We love our dog Andi.  We rescued this golden lab at the age of 7.  Currently, she is 11 years old.

Even though her health is excellent, we all know that, in general, bigger dogs don’t live as long as smaller dogs.  Given how attached our children are to Andi, we know they will be devastated when this happens.

Why is this the case?  Could the same IGF-1 link hold true in dogs as well?

Recent studies in dogs have shown a similar outcome when it comes to IGF-1 levels and survival.  Larger dog breeds tend to have higher levels of IGF-1.  Consequently, they don’t live as long as the smaller breeds with lower levels of IGF-1.

Unfortunately for me (my height is 6′ 2″ or 189 cm), taller humans have also been shown to not live as long based on IGF-1 levels.  It seems that at least in some studies there is a trade off based on height versus longevity.

Interestingly, studies of centenarians and their offspring have consistently shown lower levels of IGF-1 in those who live the longest.  This link is not just confined to certain ethnic groups.  As we have been very fascinated with the long-term health and longevity of people living in China’s Longevity Village, the same finding holds true with the Chinese.  Chinese living into their ninth or tenth decades of life consistently show lower levels of IGF-1.  These studies seem to suggest that at least in long lived families, there may be a genetic component to IGF-1 and longevity.

7 Ways to Optimize Our IGF-1 levels?

Is there some middle ground between the muscle bound hulking NFL lineman and the diminutive Ecuadorian dwarf?  What is the goal IGF-1 level for optimal muscle strength, cognitive function, longevity, and freedom from cancer and diabetes?

From this article it could appear that there is a trade off when it comes to IGF-1.  On one end of the spectrum you have muscles and strength with high levels of IGF-1 (growth) while on the end you have longevity with freedom from cancer or diabetes with low levels of IGF-1 (repair).  Is there a way to have the best of both worlds?  Can we have both growth and repair going on simultaneously?

Like with most things, there is a healthy range.  For example, when it comes to the heart there is definitely an IGF-1 sweet spot.  Studies have shown that when IGF-1 levels are too high or too low the risk of heart disease is increased.

While in clinical studies or specialized clinics you can test your IGF-1 levels, for most people these lab tests are not available.  However, there are things we can do to keep our IGF-1 levels in the optimal range.

Excessive animal meat and dairy may raise your IGF-1 levels too high.  In contrast, vegans who eat plant-based proteins tend to have low levels of IGF-1.  Could this be one reason why vegans may have a lower risk of cancer and may also live longer?

Isolated soy protein significantly raises IGF-1 levels.  If you enjoy soy then it should be eaten how it has traditionally been eaten in Asia where they eat a non-GMO variety in the whole bean form.

There have been many studies done on the effect of exercise to IGF-1 levels.  The results seem to be mixed.  My research on this topic suggests that regular moderate levels of exercise seems to optimize IGF-1 levels.

Diabetes, obesity, cancer, and premature death all seem to run together.  Researchers feel that there may be a link with IGF-1.  If we want to maintain healthy levels of IGF-1 we also need to maintain a healthy weight.

Studies have shown that intermittent fasting can help to normalize levels of IGF-1.  Could this explain why intermittently fasting may increase longevity? Certainly, excessive fasting or extreme caloric restriction can be dangerous and could drive IGF-1 levels too low for optimal health.

You may be wondering what happened to “The Refrigerator” Perry.  Unfortunately, his post-NFL football career has not turned out well.  Contrary to internet and Twitter rumors, he is still alive at age 52 but his health is extremely poor.  According to this report, he can barely walk, he weighs 450 lbs (205 kg), and he has spent considerable time in the hospital over the last few years.

What are you doing to optimize your IGF-1 levels?